Join our subscribers list to get the latest news, updates and special offers directly in your inbox

Razor's Edge Sharpening for your Blades, the 8 Best Knife Sharpeners of 2022 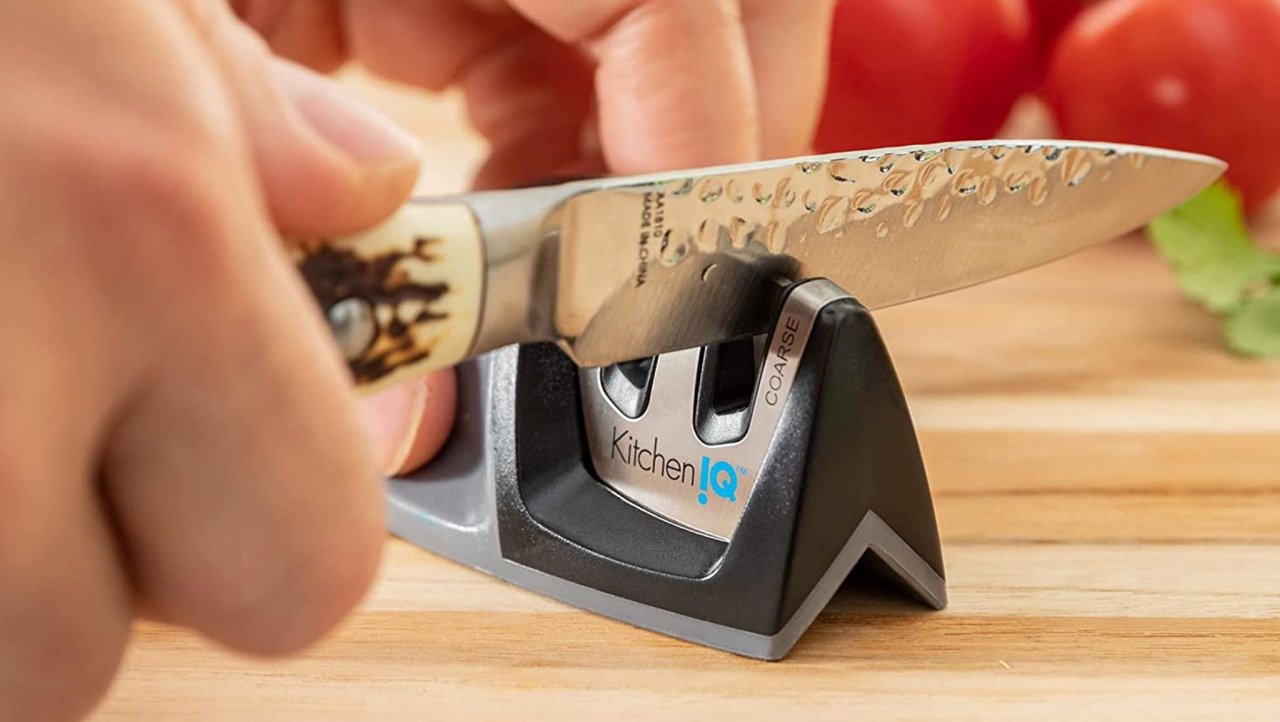 A deep, hands-on dive into the different types of sharpeners.

Knives might just be mankind's oldest tool, predating even our own Homo genus — meaning we were using them before we were even human (as we know the term today). They're marvelously useful in our day-to-day lives and can be used for cooking, household maintenance (like opening packages and trimming loose threads off clothing), survival, self-defense, art, crafting and so much more. But their edge is not everlasting and requires regular maintenance to ensure you're getting the most out of them.

If nothing else, every knife owner — be that in the realm of EDC, culinary, survival, or otherwise — should have at least one sharpener to ensure that the blades of said knives are in good, working condition when you need them. But picking out the right sharpener for you can be quite the task. That's why we got hands-on with some of the best on the market and put together the following guide to help you figure out (based on your usage, skill level, budget, and more) which one is right for you.

In the culinary and EDC worlds, knives are a pretty ubiquitous tool. In fact, they're really the base, most important tool anyone can own for those particular applications, especially when it comes to cooking. Sadly, sharpeners are not nearly as ubiquitous — which is a huge shame because even the most high-end steels around still require sharpening from time to time. If you're a new knife owner or a seasoned vet, there are a few things you should know before you ever even punch "knife sharpener" into your search engine of choice. And we've outlined some of the most important below.

Skill Level: Some knife sharpeners require a high amount of skill to use properly. This isn't to say the methods can't be learned — they most certainly can. But you should be aware of just how difficult it can be to learn how to use them. Don't let this deter you; just be prepared for the potentially significant time investment, especially with whetstones, sharpening systems, and belt sharpeners.

Budget: Like most pieces of gear, the cost at the outset varies pretty wildly – we've seen sharpeners that cost under ten bucks and others that cost thousands. As you would with any other purchase, it's a good idea to know beforehand how much you can or are willing to spend. Furthermore, it's important to understand that, like any other kind of gear, your initial investment might not be your only investment. A cheap knife sharpener might only last a few months, especially if you use it a lot. Similarly, a very expensive one could require periodic maintenance to keep it in working condition. Furthermore, there are accessories, replacement parts, etcetera you may also need.

Value: Let's say, for the sake of argument, you own one good chef knife that you keep in your kitchen, but you don't use it that often and you're hardly a gourmand. Well, you probably don't need a high-end sharpener. Rather, something cheap and simple might be your best bet. Similarly, if you own dozens of knives, you use them all regularly, and you only have a single two-stage sharpener you got at the grocery store, you may be doing your entire collection a disservice. Your investment in a knife sharpener (or sharpeners) should match your usage. Otherwise, you're compromising the overall value of both sharpeners and knives.

Manual: The most basic and common type of sharpener, these usually consist of a flat-bottomed base that can be set on a countertop and at least one sharpening slot — an indent or divot that houses sharpening elements. They also sometimes have a handle, designed so that users can hold onto it to keep it steady while drawing their knife blade through the sharpening element(s). They also often have more than one sharpening slot (usually one to three), meant to offer up multiple "stages" of sharpening (from coarse to fine). Though simple in their operation, these sharpeners offer up some of the most consistent, albeit non-customizable edge sharpening around. They're extremely easy to use and are some of the most budget-friendly around.

Electric: Usually similar to their manual counterparts in concept and format, the primary difference that sets electric sharpeners apart is that they require electricity to function (usually via a plug) and their sharpening elements are mechanized — meaning they move on their own and are usually quicker than a manual sharpener, requiring fewer passes through the element(s) to get the same razor-sharp result. Furthermore, they're sometimes more versatile — there are electric sharpeners out there designed to sharpen serrated blades, which you generally cannot accomplish with most manual sharpeners. For simplicity, consistency, and brevity, electric sharpeners are tough to beat, although they are usually more expensive.

Whetstone: Also known as sharpening stones, these are the most traditional type of knife sharpener and are (quite literally) rectangular stones of varying composition with flat surfaces meant specifically for drawing blades across. In a pinch, they can be used dry, but they're more effective (and it would be more "correct") to use them with oil on their surface. Not only will the oil help make your knife edges sharper than they would dry, but it also helps keep them from chipping and/or breaking. Whenever you see someone in a movie sharpening a knife, they're probably using a whetstone (or a stone wheel, which is kind of like an upgraded version of a whetstone). This kind of sharpener takes the longest and requires the greatest amount of skill, but they're also the best for customizing your edge angles, sharpness, and more.

System: A broad and hard-to-pin-down category, sharpening systems usually borrow their concepts from other types of sharpeners and package them together with a number of devices to allow for extremely accurate, customizable, consistent (in the hands of an experienced user), quick knife sharpening. However, they do tend to be complicated and vary wildly in form and function from one to the next. These sharpeners have a high learning curve and run the gamut of pricing, value, format, etcetera, but they're also one of the more preferred methods by professionals, especially in the everyday carry industry.

Which Sharpeners Best Suit Which Kinds of Knives?

While the purpose of knives can vary widely, it's worth stating that most sharpeners can sharpen most knife edges. However, the degree to which they will work depends largely on the knife itself and whether the sharpener was designed for that type of knife. Kitchen knives, for instance, usually have thinner blades than, say, survival knives. While you could use a belt sharpener to keep the edge on your kitchen blade, you might find that the blade is wearing away pretty fast (sharpening always removes some of the steel from a blade — that's just how it works). Similarly, a manual two-stage sharpener might not give your survival knife the sharpest of edges and it could take a lot longer to sharpen because of the hardness of the steel (and that could end up inadvertently wearing down your sharpener).

The big point to all of this: you don't really have to obsess over having the right sharpener for every type of knife. However, if you want your knives to last and you want to ensure they have the best edge possible, you'll want to make sure the sharpener(s) you get is/are designed for the types of knives you have. If you're ever unsure, a quick Google search may elicit an answer or you can turn to the manufacturer of the knife (or sharpener) in question to find out for certain. Furthermore, there are multitudinous blogs, YouTube channels (some from big-name brands, like Almazan or Wüsthof or BladeHQ), etcetera that serve as incredibly valuable resources for all things knife-related. Just make sure you're getting your info from a reputable source.

The Best Knife Sharpeners of 2022

The Best Bushcraft Knife of 2022

The Best Hunting Knives of This Season 2022

Razor's Edge Sharpening for your Blades, the 8 Best Knife...

Fast Facts About Cutting Boards And Food Safety In Your...

HOW TO USE KNIVES SAFELY